Should Private Practice Hearing Care Use Facebook Advertising Or Google Advertising? [The Outcome Of An In-Depth And Advanced Experiment]

Private practice hearing care has been heavily fueled by advertising for many, many years.

Traditionally, it was through platforms such as:

And more recently, there’s been the emergence of platforms such as Google advertising and Facebook advertising.

Although Google and Facebook advertising have been around for many years, we have always been hesitant to recommend them to our Inner Circle members (who are made up of some of the best performing private practice hearing care clinics in the world).

There are two reasons why:

#1 – It has been the blind leading the blind.

During my five years in this industry, I’ve yet to see a single clinic be able to prove that either of these platforms has generated a consistent ROI positive return for them.

The marketing groups (or manufacturer marketing departments) that run Facebook and Google advertising campaigns nearly always report unhelpful stats like impressions and clicks rather than conversations and the cost per patient acquisition.

On top of that, they charge so little to run the campaigns that it’s clear that they are not investing any real expertise or effort into them.

#2 – If your website doesn’t perform organically, then why would you spend money to drive more traffic to it?

Many of the clinics that I’ve seen spend money on Google or Facebook have very poor websites, which means that most of the Google or Facebook traffic is directed to mass-produced landing pages that contradict the clinics’value proposition, i.e., they talk about dementia, use scarcity, and dangle “free hearing tests” or “coupons” as bait.

However, with many of our members having rock-solid foundations, great messaging, and a website that organically turns visitors into patients, we decided to conduct an experiment in November 2021.

We invited Inner Circle members interested in being part of a trial.

For six months following, we drove the experiment forward, spent tens of thousands of dollars on both platforms, and looked for an answer to the question of whether either of these advertising platforms is a good place to spend your advertising dollars in today’s world for patient acquisition.

In this article, I’m going to share the outcome of the experiment, the strategies used on both platforms, and my recommendation to where you should be spending your advertising dollars.

Essentially, you can create an audience based on factors such as demographics, age, income, and interests, and Facebook will develop an audience of its users.

You can then point your advertisement at them, and Facebook charges you a fee for your advert being seen in the newsfeeds of these specific users.

Although it has traditionally worked well for big brands that are looking to create exposure, and small e-commerce businesses that are looking to drive low-cost impulse purchases, it was set to be an interesting experiment to see if it could persuade people to finally address a hearing challenge.

What was the strategy?

Of course, Facebook is a vehicle, not an advertising mechanism. What I mean by this is it’s a tool for putting a message in front of an individual – that’s it.

The real strategic thinking had to go into what the advert said, who it was targeting, where the user went to when the advert was clicked, and what the journey looked like to get them from scrolling past cat videos to scheduling an appointment.

The strategy we decided upon was called the “Alternative Reasons” lead generation campaign.

Here was the thinking …

If you then see an advert that encouraged you to schedule a hearing assessment — even if it offered a free screening — it would be a big ask. A little like having a “marry me” button on a dating profile!

So, instead we needed to slow it down.

… and they’re frightened to death that they may have a hearing loss and feel forced to make a decision.

However, what if we could give them a perceived solution to their problem that changes their beliefs and uses curiosity to leave them intrigued by other reasons that they may be struggling to hear?

Essentially, what if we could point the blame elsewhere and tell them that there are many other reasons — aside from a hearing loss — that may be causing them to experience hearing challenges?

This shift would catch their interest, and if they believed that there are other potential reasons, then they would be much more open and intrigued to discover them.

That’s why we developed this flow: 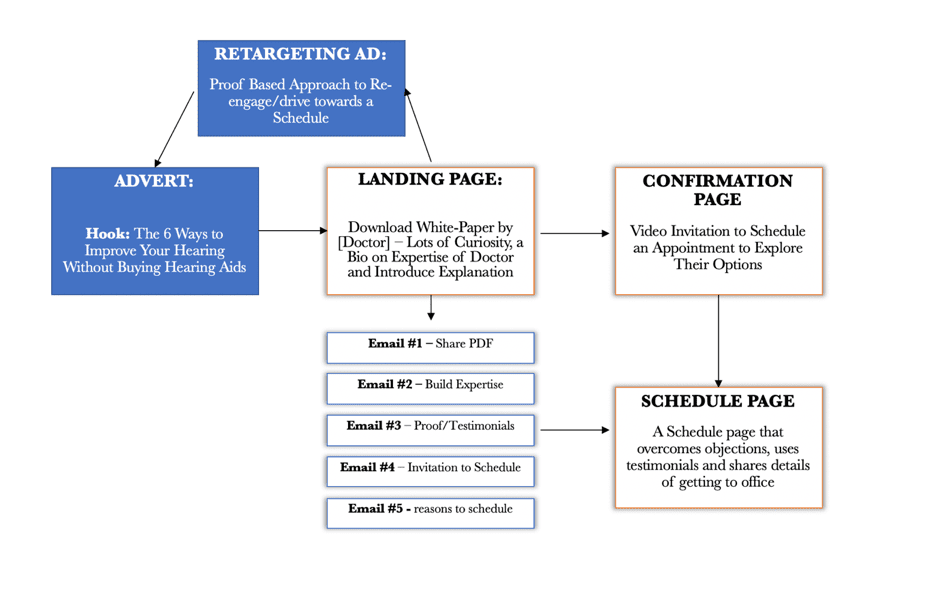 We created a guide called:

The 6 Ways to Improve Your Hearing Without Buying Hearing Aids.

The advert introduced the guide and encouraged viewers to download it, which took them to a purpose-built landing page.

The page then directed people to a form to download the report in exchange for a name and email address.

Upon downloading, they were then directed to a confirmation page.

The page thanked them for downloading the guide, shared that there are many reasons for a hearing challenge,and offered an invitation to schedule an appointment to have a comprehensive hearing assessment.

To accompany this, an email automation then kicked in over the next 20 days, which sent a series of five emails that shared the report, delivered expertise, delivered proof, and then pushed the patient toward the next logical step which is to schedule an appointment.

It was a very different approach to what anybody has done previously.

Instead of trying to attract the low-hanging fruit of people that want to schedule an appointment right now (which is very difficult and has no scalability on a localized scale) – we were casting a big, wide net to people that have any form of concerns about their hearing.

Five of our Inner Circle members were involved in this beta-trial, and we developed the entire marketing funnel/plan bespoke to each of them and started running adverts.

We tweaked, amended, and utilized many different angles to continue to test, measure, and improve.

Some things worked well, and others didn’t – but across all five members’ accounts, here’s what the top line numbers looked like:

Now for the impossible to track numbers:

Although our hope when we first developed this beta-trial was that we could get appointments for around the $150 mark, we realized through blood, sweat, and tears that this number was not attainable.

We had some of the smartest Facebook advertising people we could source working on the account and we developed a highly strategic approach to the campaign … the challenge was that taking people from relaxing on Facebook toward a healthcare decision was too much of a leap.

Therefore, our belief is that Facebook advertising is not the best way to spend your advertising dollars for patient acquisition.

The only recommendation for using Facebook advertising would be to promote a message toward your existing patients, or if you’re looking to build exposure to your brand with no direct ROI.

You may be familiar with Google advertising (or sometimes known as PPC).

If you’re unfamiliar, it’s Google’s advertising platform that allows you to bid to have your advert appear when somebody makes a search that meets the specific criteria that you outline.

For example, if you Google “Hearing Care Texas” – you can see two ads that appear at the top. 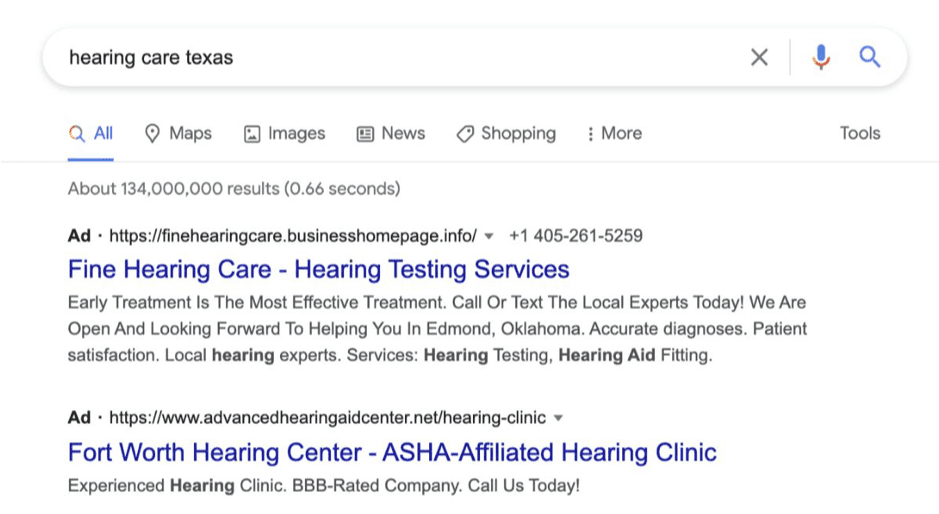 Those clinics then pay Google when somebody clicks on one of their adverts (typically around $5-$15 per click).

The challenge that we have always had with many of the Google advertising campaigns that are run within the hearing care industry is that they’re unbelievably lazy.

Essentially, they miss the mark, resulting in over-spending, wasting time, and not achieving the right level of results from an investment.

This meant that when we started to assemble our team of Google advertising specialists, we wanted to define what we believe to be the right strategy to achieve the right outcomes.

What was the Google Advertising Strategy?

Instead of just chasing people looking for “hearing aids” – we instead wanted to amplify the areas that members were already seeing success in, and allow them to get more exposure, traffic, and attention in these proven areas.

If something was working organically, then we wanted to add more fuel to it.

Although the exact Google advertising strategy is for our Inner Circle members’ eyes only, it consisted of six key focuses on different sets of highly specific keywords.

Based on all the results across all seven members that were part of this experiment, here are the top-line numbers.

To clarify – this means that it’s costing $25.77 in advertising spend to make the phone ring or have somebody complete an inquiry form on the website to schedule an appointment or request a callback.

These are some of the lowest numbers we’ve seen in the industry!

But of course, it doesn’t matter how much it costs to generate an inquiry if the inquiries are tire-kickers, don’t answer their phones, and don’t turn into patients.

Luckily, some members have also been tracking the specific inquiries and carefully reviewing ROI.

Here are the numbers that one recently reported to us:

These are the kind of numbers we want to see and are working toward. Best of all, due to Google’s AI and continuous split-testing, the results often further improve over time.

I would be very hesitant to invest in Facebook advertising with the purpose of acquiring new patient opportunities.

We invested a lot of expertise and effort into trying to make it work — and I consider ourselves to be some of the best marketing strategists within this industry — and we couldn’t get it to deliver the desired outcomes.

However, I do believe that intelligent Google advertising is the right approach for a clinic that has a website that performs organically, has a strong value proposition, and has the bandwidth for more inquiries.

But I must emphasize the importance of doing this correctly.

Many agencies have a plug & play set of keywords and pre-built landing pages that don’t represent who you are … this approach is tiresome. Instead, you need to amplify what is working for you and where your local traffic opportunities are.

There is no one-size-fits-all Google advertising strategy.

My Plea To You

Be very careful of who you trust to invest your advertising dollars. We hear some horror stories and see some reports that are purposely confusing.

If you need advice, help, or want us to review your advertising strategy, then do not hesitate to reach out. 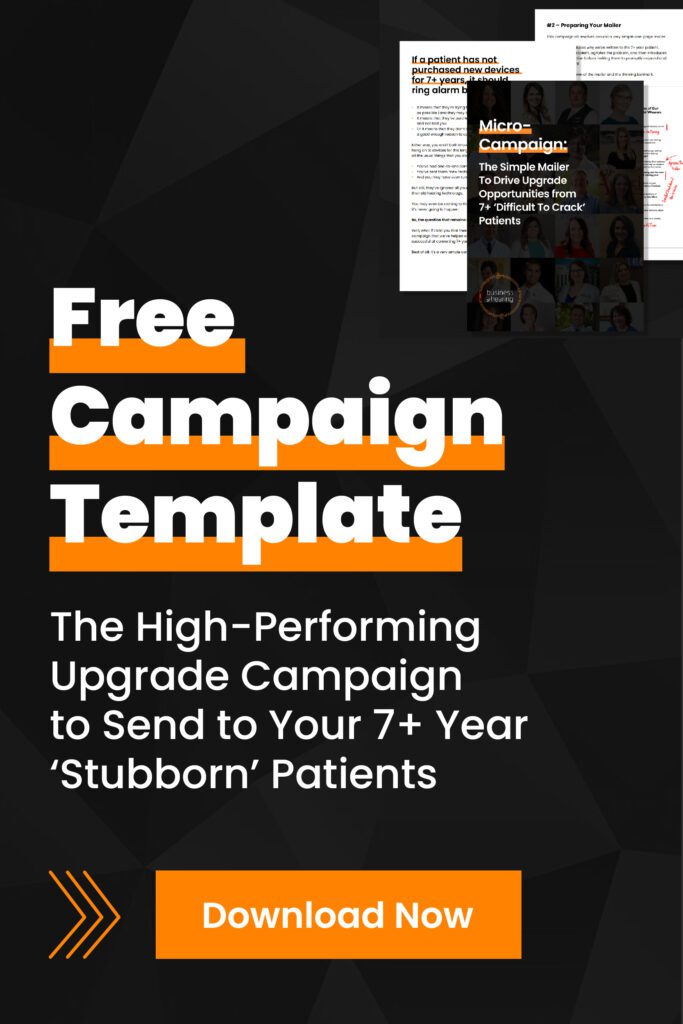